Learn about the 10 most expensive buildings including the Ambani house 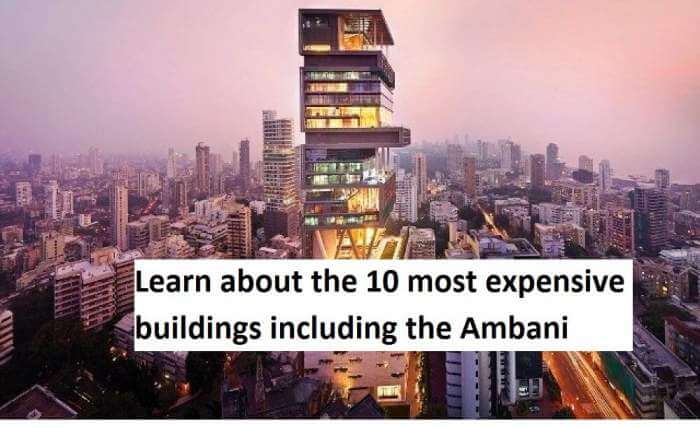 Ambani’s Antilia is at number 10 in this list and you might be surprised to know about other buildings.

Where it comes to the most expensive buildings, our attention first goes to Antilia. Mukesh Ambani’s Antilia is one of the most expensive houses in the world, but when it comes to billings around the world, it comes in the last number in the top 10. That too when the mosque and other sites of Mecca, one of the most popular religious places in the world, are removed from the list. The price of Mecca Masjid to other famous religious places cannot be accurately described, but according to a report, the mosque of Mecca is worth more than $ 100 billion. Let us remove the Dharmil sites from the list, but even then there are many famous billings around the world that you might be shocked to know about.

These billings are not only very expensive but they are also stored like a world heritage and their maintenance also costs crores of rupees every year. So let’s talk about the world’s most expensive billings.

Who is the owner- Mukesh Ambani

Now finally he has come home from whom we were talking about. Mukesh Ambani’s Antilia is the most expensive house in the world and this house built in 400,000 square fit runs with the help of 600 staff members. There is a yoga room, theater, ballroom, swimming pool, parking space, etc. After all, if the house of India’s richest person is there, then it becomes so special.

If you are wondering why the Burj Khalifa is not in this list, then let us tell that it was worth about $ 1.5 billion and that is why it was not included in this list.

Where is Mecca located

Who is the owner – Government of Mecca, built under the project of King Abdullaziz

Now maybe you are a little skeptical after seeing this because we first talked about the mosque of Mecca and now it is seen in the picture. Actually, behind the mosque of Abraaj Al Bait Mecca is the tower in which a big clock is built. It is also known as Mecca Royal Clock. The main purpose of making it was to make this pilgrimage place a bit mordenized.

This building has hotels, shopping centers, residential apartments and what not. Now that it has been built on the side of Mecca Masjid, the most expensive building of the century, it will surely be equally expensive.

Where is located- Singapore

Who is the owner – It was created by the Las Vegas Sands Corporation of America. This is his only branch in Singapore.

The most expensive casino in the world, if any, is the Marina Bay Sands of Singapore. Along with the world’s largest rooftop Infinity Pool, it also has several restaurants, 7 Star Hotel SkyPark and a viewing area to watch. It adds beauty to the beauty of Singapore and in the last few years it has become the identity of Singapore. The building is also like a resort with 2,561 rooms and 160,000 square fit gaming space. 3,902 people can come together in the ship-shaped structure above its three towers and can enjoy its benefits.

Where is located- Singapore

Who is the owner – Property of Ghenting Group of Malaysia.

At number three in this list is a Singapore building which you might be surprised to see. This place is one of the most popular tourist spots in the world. Along with being a casino, it also has Universal Studios. Yes, Singapore’s Famous Universal Studios is here. Along with this there is also an adventure water park, an aquarium which is called the second largest Oceanarium in the world. Now you must have understood why the price of this resort is so high. Every year, millions of people from all over the world visit here and there are a total of 7 hotels in which 15000 rooms are also present.

Where is located- Dubai

So far, you must be wondering why no Dubai building came in this list, so take its number too. Burj Khalifa is often counted in Dubai’s list of expensive billings, but believe Emirates Palace is more expensive than that. This Burj is very close to Al Arab and this 1 km long hotel has 8 floors. It is bigger than the Buckingham Palace of Britain and you must have guessed its beauty.

It is one of the three most expensive hotels in the world. However, the Cosmopolitan Hotel in Las Vegas also remains its price. So both these hotels can be considered as collision.

Where is located- New York City

How much- Wall street journal

Who is the owner – the Port Authority of New York

It is also called One World Trade Center. Actually, Freedom Towel is built only after 9/11 terror attack. It has been re-erected in the World Trade Center complex and also houses the 9/11 Observatory. It is also one of New York’s most popular tourist spots. Although not all areas are open to the public, they can visit the Observatory. It is the tallest building in America.

Where is located – Macau

After building the Venetian Resort in Las Vegas, the Las Vegas Stands Group also built it in Macau and is one of the largest and luxury hotels in the world. Only the casino of this hotel is in the area of ​​546,000 square feet. The resort has 3,000 rooms and is the largest single story hotel in Asia by floor area with an area of ​​10,500,000 square feet.

Where is it located- Las Vegas

Who’s the owner – The Blackstone Group

After all, a building in Las Vegas was also included in this list. Why not, in most of Asia the billings of groups of Las Vegas are among the most expensive buildings and that is why Bellagio is one of them. It is also a high profile resort which also has the world’s largest chocolate fountain. Yes, you read it right, the world’s largest chocolate fountain. There are also casinos, 3950 rooms and 8 acres of dancing water fountains along the lake.

Where is located- Dubai

How much price – 2.17 billion dollars (Telegraph)

Who is the owner – Tamir Holding Investment

It is the largest sky scraper after Dubai’s Burj Khalifa and Marina 101. It is one of the highest residential towers in the world and is a hallmark of luxury. You will definitely see something special on every floor in its 101 floors. It was the tallest residential tower in the world from 2012-2015, but was overtaken by New York at 432 Park Avenue in 2015.

Where is located – Hong Kong

This glass skyscraper in Hong Kong is one of the most famous banks in the world. It is in the Triangle shape and its architect is Chinese American IM Pei. It is the headquarters of the Hong Kong branch of the Central Bank of China and it looks like a unique attraction. Although it was made in 1985, but since then it has undergone many modifications.

Can You Use A Regular Mattress On A Murphy Bed?

5 Steps How to Cover Up a Tattoo With Makeup